The aim of this anthropological research project has been to critically analyze the project of multiculturalism and its consequences in Bolivia. The project has focused on the question of under what circumstances promoting multiculturalism is compatible with the aims of gender equality. Through the study of organized, indigenous, women and men in the department of La Paz the following research questions were considered: a) How are female political subjects formed and transformed in the actual Bolivian context? b) To what extent is the feminist project contradicted by the cultural project? c) To what extent are excluding structures in fact reproduced by the indigenous base organizations themselves? d) Under what circumstances can women take on political leadership roles challenging existing gender norms?

The project was implemented with qualitative research methods. During a longer fieldwork in Bolivia indigenous base organizations were studied and interviews were conducted with indigenous women and men politically active at different levels of society, in parliament, in the municipalities and other organizations of civil society. The political subjects were asked about their current struggles, and the extent to which they comply, resist and contest excluding structures. By highlighting the intersection of gender, class and ethnicity the aim is to explore how power relations, inequality and exclusion are constructed; contested or embraced, and unravel the role of multiculturalism in this process. 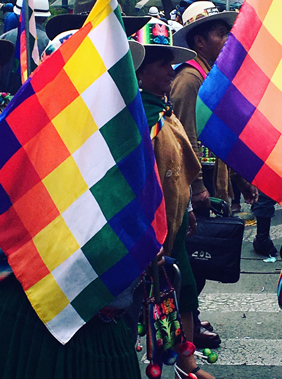